There are some 3.5 million persons of Japanese descent currently living outside Japan. This population of overseas Japanese has an important role to play in international understanding and international exchange. The Association of Nikkei & Japanese Abroad (Kaigai Nikkeijin Kyokai) seeks to provide a bridge between overseas Japanese and Japan itself. The aim of the Association is to harness the efforts of Japanese people throughout the world in promoting a better understanding of Japan through a variety of exchange programs and joint cooperation initiatives.

History of the Association

During the Second World War, many Japanese nationals and persons of Japanese descent (known collectively as Nikkei) were forced into camps throughout the United States. They were cheered by special deliveries of miso paste, soy sauce, Japanese books and other items sent via the Red Cross from Japan. Following the end of the war, when Japan found itself devastated in the aftermath of defeat and suffering from crippling shortages of food and other essentials, the Nikkei repaid the gesture by sending aid back to the mother country in the form of powdered milk, food supplies and clothing to help out their fellow countrymen in their time of need.

These goods were dubbed LARA goods after the organization LARA (Licensed Agencies for Relief in Asia), a broad collection of Christian church groups, labor unions and other bodies dedicated to the cause of providing relief to Asia. After LARA commenced operations in 1946, Japanese nationals and Nikkei in the United States pushed for material assistance to be provided to Japan. By 1952, Japan received LARA assistance worth over ¥40 billion (in the currency of the time), of which around 20% or ¥8 billion was contributed directly by Japanese nationals and Nikkei. The success of LARA in the United States led to similar initiatives starting up in Canada and South America.

This led many members of the national Diet in Japan to call for a formal ceremony to recognize the dedicated contributions of Japanese nationals and Nikkei abroad. Preparations for the ceremony were coordinated by the Nikkei Overseas Liaison Office, which at the time was the only organization in Japan representing Nikkei abroad.

Japanese nationals and Nikkei were increasingly returning to Japan for a variety of reasons including business, study and visits to family graves, and this led to a steady increase in cultural and economic exchange and international understanding of Japan in the world. Soon Japan was elected to the member of United Nations by unanimous vote, and in honor of this momentous occasion the impending ceremony was named the Nikkei Friendship Convention in Commemoration of United Nations Membership. The Convention, held at Tokyo’s Sankei Kaikan in May 1957, was attended by 364 Japanese nationals and Nikkei from 14 countries.

Many of those who attended called for the Friendship Convention to become an ongoing annual event, but it was not until 1960 that the next Convention was able to take place, mainly due to funding difficulties. The name was changed to the Convention of Nikkei and Japanese Abroad from this second Convention, with the Nikkei & Japanese Abroad Liaison Association set up as the secretariat. The third Convention was held two years later in 1962, after which it finally became an annual event.

The Association of Nikkei & Japanese Abroad 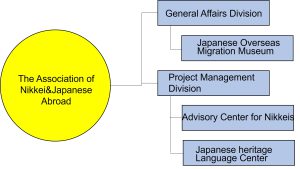